Broadway: a brand new way to watch live TV on your iPhone, iPad or Android device (plus PC or Mac) – at home or around the world!

Watch live TV on your iPad, iPhone or Android tablet* at home:

iPad users can watch their favorite TV programs live on their iPad, anywhere in the home: in the kitchen, in the garden, at the pool. Any program which they can watch on their TV set, such as live prime time TV programs and sports events, can be transmitted from Broadway to an iPad throughout the home. With Broadway, you'll find the iPad will become the #1 way to watch live TV!

Do you travel and want to be able to see your favorite TV programs from home?

Are you often abroad and don't want to miss your favorite TV shows or sport events? Thanks to Broadway, you can stream your home TV programs en route to your iPad or iPhone via a wireless data network or Wi-Fi wherever you are in the world.

Are you a mobile Mac or PC laptop user?

Imagine using your PC or Mac to surf the net and watch TV at the same time, anywhere in the world! With Broadway, you can now watch TV wherever you have a Wi-Fi connection, in the home or around the world! 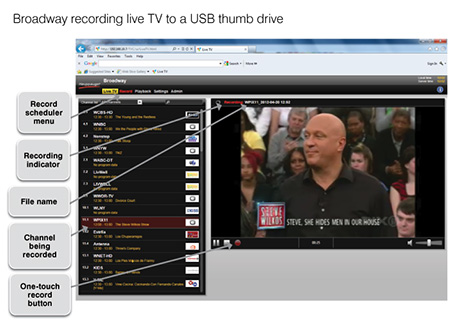 Record your favorite TV programs to a USB thumb drive plugged into Broadway, and then playback those recordings!

If you already have Broadway, the new Record feature is available as a free download. Just go to our Broadway support page for more information.

Want to watch your home security camera, anywhere in the world?

* Note: While we talk about the iPad and iPhone here, Broadway also works with Android phones and tablets plus the iPod touch, PC and Mac. Broadway sends live TV to non-Apple mobile devices using Flash. Broadway determines which device it is sending video to, and changes the video format depending on the device type.

Broadway: a brand new way to watch live TV on your iPhone and iPad (and other mobile devices) – at home or around the world!

Broadway is a small stand alone device which connects to any TV signal and streams live TV wirelessly to mobile Apple® devices – the iPad, iPhone or iPod Touch. Live TV can be watched over your home Wi-Fi network or it can be streamed over the Internet anywhere in the world where your Apple device has an Internet connection.

Broadway also works with Android phones and tablets, plus PCs and Mac notebooks and netbooks. Android devices need version 2.2 or later and a Google Chrome browser, while PCs and Macs just need a browser with Flash support.

How does Broadway work? 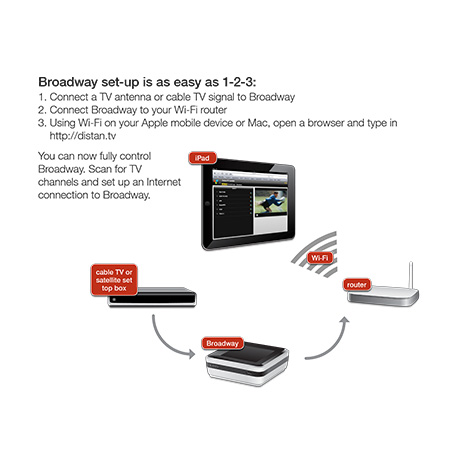 Broadway connects between your TV source and your home Wi-Fi network. Broadway takes your TV signal, converts it to format which can be displayed on your mobile device (the Apple iPad and iPhone use one format type, while Android, PCs and Macs use another), and then sends the converted TV signal to your home router. Your home router then transmits the live TV signal to your mobile device via Wi-Fi or the Internet.

Broadway is "always on" with extremely low power consumption. Connect Broadway to your TV source, put it in a corner and Broadway will always be ready to send your favorite TV programs to your mobile device, anywhere in the world!

Broadway can also stream live TV to a PC or Mac

Our distan.tv server makes the setup of Broadway a snap! You can now scan for TV channels and set up an Internet connection to Broadway.

Broadway is a networked TV receiver which features a built-in cable ready TV tuner and set top box connections, a high definition H.264 compressor and a network connection with support for Ethernet and Wi-Fi using 802.11B or 802.11n.

Broadway converts and compresses the live TV signal to a Apple compatible H.264 video format (or Flash when transmitting to a Mac, PC or an Android phone) and streams it wirelessly to Apple® mobile devices via a home router. The Broadway router connection can be Wi-Fi or Ethernet.

For watching TV outside the home

Your home router needs to be connected to Broadway and also connected to the Internet. An uplink speed of min. 256kbit/s is recommended and Wi-Fi hotspot or 3G connection where you want to watch TV on your mobile device.

System Requirements for connection to a PC

System Requirements for connection to a Mac 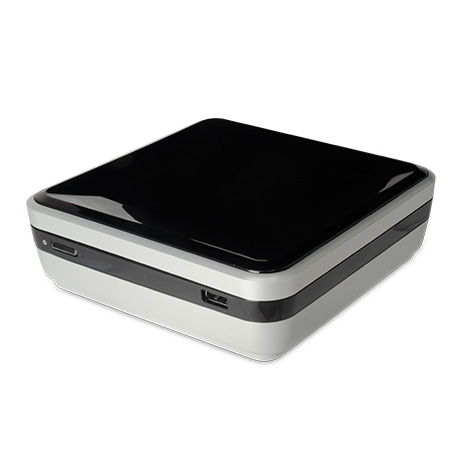 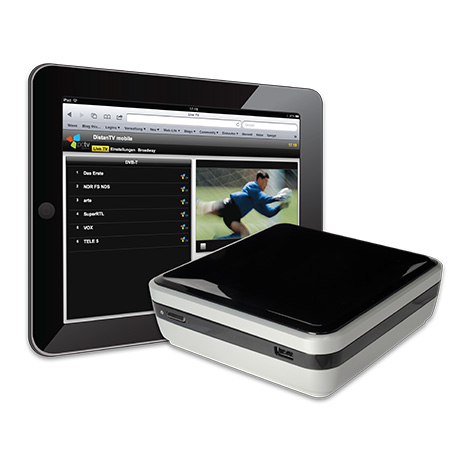 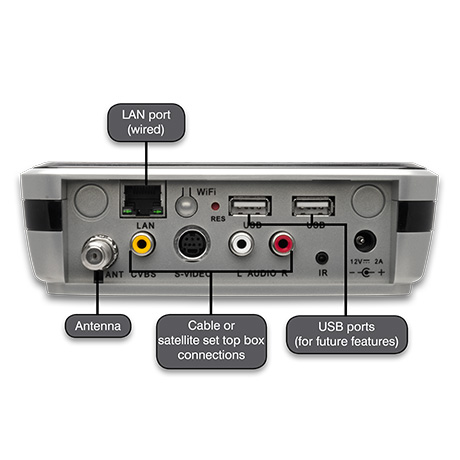 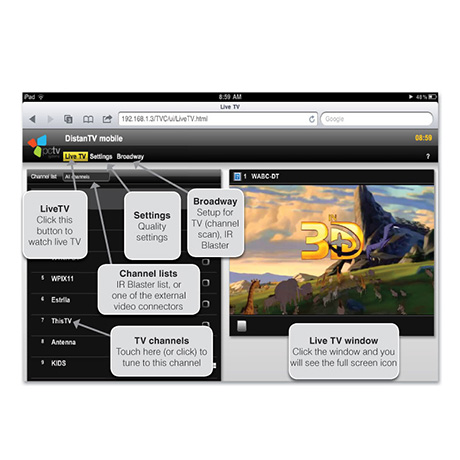